ULI Pittsburgh would like to thank everyone for attending the 8th Annual Placemaking Awards and all the sponsors that made the event possible. On Thursday, May 12th, over 150 attendees celebrated projects throughout the Pittsburgh region that showcased best practices in placemaking. By definition, placemaking embraces the creation of spaces that promote people’s health, happiness, and wellbeing through planning, design, and management. 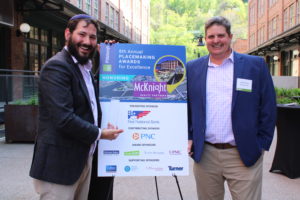 2021 Placemaker of the Year, McKnight Realty Partners, hosted the event at their latest development, The Highline.  McKnight Realty Partners, is a full-service, fully integrated real estate company that develops, owns, operates, and provides services for a portfolio of over 7 million square feet of office, industrial, retail, hotels, parking facilities, and film production soundstages, and mixed-use properties.  The McKnight Team has focused its efforts on the adaptive reuse and repositioning of quality office building assets and landmark properties here in Pittsburgh as well as in other key real estate markets.

During the award ceremony six Placemaking projects, selected by a Jury of industry professionals, were recognized: 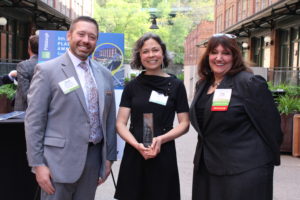 Centre Ave YMCA, a renovation and adaptive reuse of the historic YMCA in the Hill District, received the Catalytic Placemaking Award.  The four-story building was constructed in 1922 and served as one of the only social and recreational facilities for African Americans in the region from the 1920s through the 1950s. The building received a historic designation from the City of Pittsburgh on August 8, 1995.

The $7.4M renovation, a true partnership between ACTION-Housing and the YMCA of Greater Pittsburgh, included 74 Single Residence Occupancy, programming spaces, an expanded kitchen, elevator, and many more modern features including a renovated Gym. 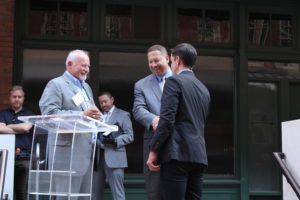 The Community Award, presented by Presley L. Gillespie, President & Chief Executive Officer – Neighborhood Allies, was awarded to Homewood Community Engagement Center Phase I & II.  The Pitt CEC, a University of Pittsburgh initiative to create a greater impact in communities, focuses on specific needs, interests, and input of the surrounding community to align with the work of Pitt researchers, staff, and students. 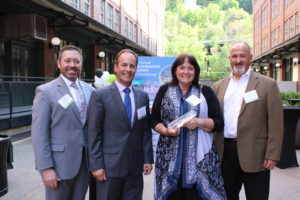 The Healthy Place Award went to Family Pathways Addition located in Butler at Monarch Institute, a three-story building addition to connects a decades-old building to house a training and venue space for Family Pathways that promotes wellness with emphases on restoration, sustainability, and enhancement of relationships.  The addition provides a welcoming entrance and excellent use of available space. 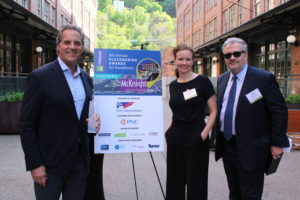 John Vogel, Attorney-Tucker Arnsberg announced the Transformative Placemaking Project, The Roundhouse at Hazelwood Green.  Once a home for machines, the 19th Century building now welcomes 21st Century researchers and entrepreneurs. It originally serviced and turned train engines, now, as a technology accelerator and co-working space for OneValley, the roundhouse will not only speed the delivery of groundbreaking innovations, but it is the first project to be tracked against Pittsburgh’s new resiliency standards. 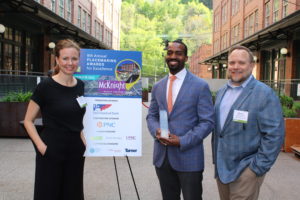 Steven Savich, Michael Baker International, Vice President recognized Visionary Place Award winner, Fifth and Dinwiddie Development, a planned for mix-use with the East site being adaptive reuse and slated for retail, co-working spaces, and workforce development area to train neighborhood residents for clean energy jobs. The West site will have retail along with the street level and 171 units of housing above. A public plaza connecting the east and west side will be provided for community use. 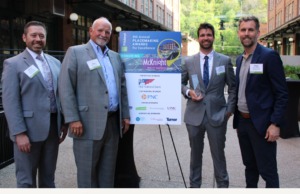 The Final Award presented at the ULI Pittsburgh Placemaking Event, The Jury Award, was based on projects that may not fit into any of the Award categories but still need to be recognized by ULI.  This year’s Jury recognized 3 projects for their innovative and people-oriented approaches to our community’s needs due to the pandemic.  The Allegheny Overlook was selected based on success in bringing people downtown through the transformation of Fort Duquesne Blvd into an inclusive new destination that exemplified public space for safe gathering and enjoyment of entertainment, recreational and social activities from June to September.  Collaboration, creativity, and partnership were key to the success of the placemaking outdoor space.